Catherine was diagnosed with Crohn’s disease at just 16 years old. While her friends were finding their way in the new and exciting adult world, Catherine was making sense of a world that looked very different. Coping with intrusive, debilitating symptoms, going backwards and forwards to see the doctor, and in and out of hospital, her life was in stark contrast yet to her, it was normal.

Catherine’s Crohn’s was severe. Her flare-ups were relentless and so serious that she was regularly hospitalised, often for long spells. Eating was almost impossible. She ate very little, and what she did eat, she passed very quickly. As a result, she became physically weak easily, and her weight was a constant issue. Prescribed drinks designed to build her up didn’t make much of a difference, and often when she fell to just six stone, tube-feeding was the only option to build her strength.

Catherine endured multiple major operations in a bid to get some relief from the almost-constant symptoms. Nothing worked.

As the years went on, still nothing improved, and the pattern continued. In fact, things got worse for Catherine.

Already suffering from ever-increasing arthritis as a result of her Crohn’s, she was also diagnosed as epileptic. Regular, extremely violent fits became just another part of her life. Still, Catherine didn’t complain. She stayed positive, kept a sense of humour and did as much as any doting mother for her two young sons, Gary and Derek, and for her husband, Billy.

In 1992, 16-year old Derek returned home one night to find his mum bent over in agony, standing on a kitchen worktop and hanging washing. Yet, she still refused to let him call the doctor. In true Catherine style, she said: “I have work to do…”.

In the early hours of the morning, when the pain became unbearable, an ambulance whisked her along the all-too-familiar route to the hospital. Catherine’s bowel had burst, and she had a serious infection. The infection was out of control.

Catherine’s body couldn’t cope, and at just 37 years of age, she passed away leaving a loving husband and two adoring sons. 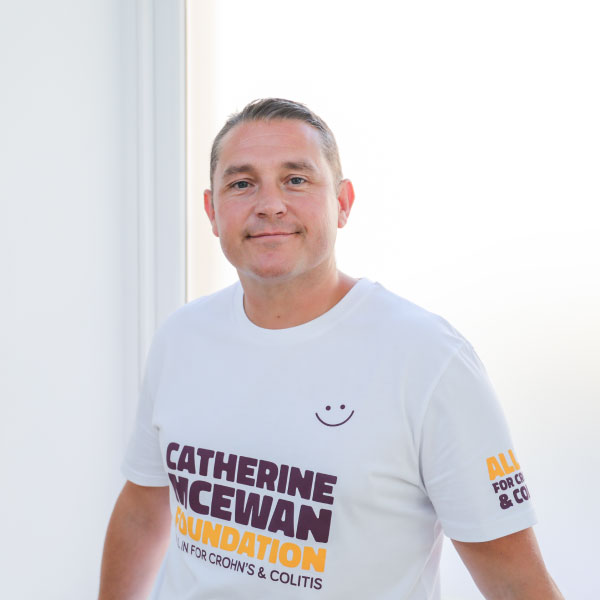 His family’s battle inspired Derek to do something so fewer families would have to go through the same suffering.

Grief took its toll on the family Catherine left behind. While Derek was learning to live without his mum and adjust to a very different life to the one he considered normal, he recognised how IBD affects every single family member, not just the patient. He realised just how much it impacts on parents, brothers, sisters, friends and others.

He set up The Catherine McEwan Foundation in 2003, and already it has changed the lives of thousands of patients and families living with IBD.

If you’d like to get involved, please get in touch.